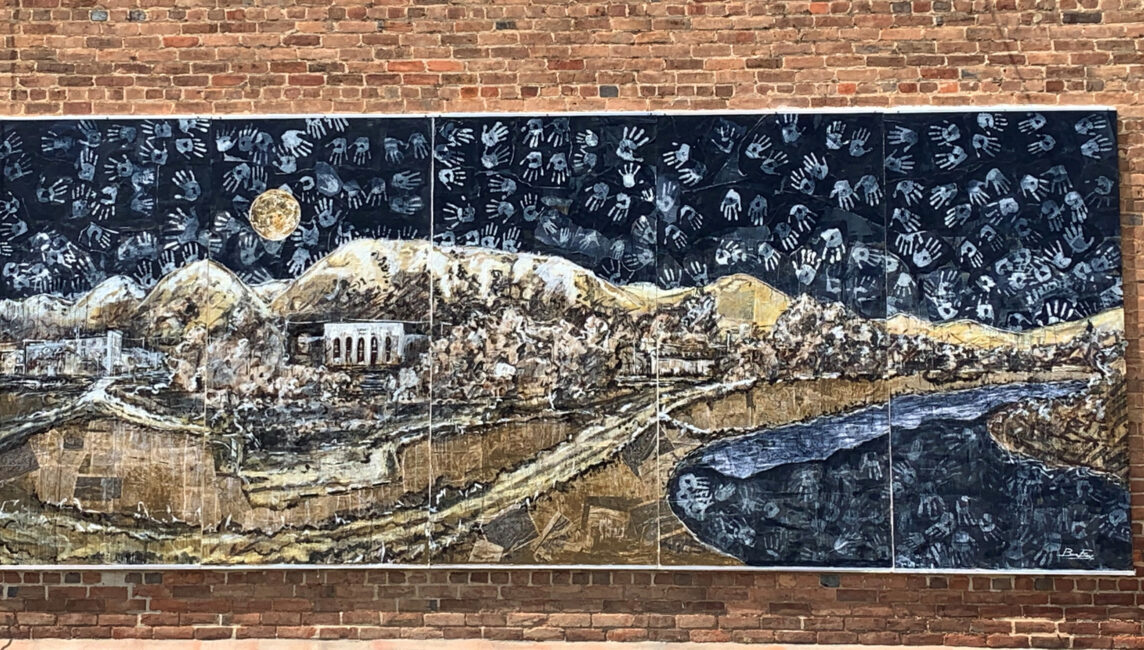 A new beautiful view has been added to the Appalachian Mural Trail, Buena Vista. A small mountain town located a hop, skip & a jump off the Blue Ridge Parkway just over the North Carolina line in Virginia. Known for its picturesque landscape the town has now added 4 outdoor murals to the scene.

The featured mural engaged the community in the production. Local children were invited to make a series of palm prints on paper that were then used as a collage element in the mural. This method for involving local kids has brought the community into the process, leaving a visible testament to the community itself.

“Reaching Ever Upwards” mural/collage captures the character of the city in twilight. Elements of the mural honor the pa st and look to the future, while also standing firmly grounded in the present moment. Historic documents are integrated in the piece, key landmarks nestled into the landscape, and handprints from local children frame the mountains, river, and city.

This mural project has been a partnership between ActionBV, GoBV, the City of Buena Vista and local citizens and businesses. Artist Benjamin Frey, dual resident of Buena Vista and Philadelphia, was selected to create the mural after an RFP process. He has worked with ActionBV to solicit community input to create a mural to inspire passers-by to stop and engage, perhaps by posing for photographs with the artwork.

Frey says “The mountains and people are what define this town, both for ourselves and for visitors. In essence, BV is a quiet town nestled between the mountains, the river, and the sky. I’ve created quite a few sketches to capture the mountains, and I keep returning to the theme of the view from the floodwall, which offers a perspective on the town, the mountains and forest, and the river that it follows. After considering various ways of integrating and representing the community itself, I have come up with an idea that I feel expresses the togetherness and forward looking spirit envisioned for the project while integrating beautifully with my vision for the mural.“

To check out the Appalachian Mural Trail, go to muraltrail.com . You will find more than 120 magnificent murals with maps and directions to find the murals in the mountains and piedmonts of North Carolina, Virginia, Tennessee and Georgia. It’s all FREE to view!